Welcome to Endevor Hounds home to the first Silken Windhound in the United Kingdom, we live in the South of England having been in our present home for over twenty years we have kept and shown Borzoi since 1978. Adding Miniature L/H Dachshunds later and from 2005 Silken Windhounds.

In 1995  we added Miniature L/H Dachshunds. Millie the black and tan became our foundation bitch of this breed, along with her two red daughters from different litters; Jas was our last dachshund, she was so sweet and silly, it's hard being without her. Jas had a litter of just two beautiful pups, you can see photos of them under, although sadly we have no Dachshunds of our own now  Our Dachs.

Continuing in our search, for the perfect complementary smaller breed for our Borzoi, we have found the Silken Windhound.
Fira  is the first UK imported Silken (from Sweden - Starcastle Hounds - Sussi Sternjborg) lives here with us. In 2006 she fell for the hansome Kristull ElvenKing Wolkowo and in July of that Summer the first Silkens were born in the UK.

On Christmas day 2007 the 2nd UK Silken litter was born here at Endevor to Fira, this time in Endevor's sole ownership, there were just two pups in this litter, one of each Diva and her brother Caspar

We are proud to be owners, as the first Silkens, enter into the UK. We will endeavour to ensure the development of this lovely Breed in the years ahead. The first litter of Silkens was born here at Endevor in co-ownership with Starborough Kennel, who took 2 puppies of the litter of the four Firegirls. You will find more photos of Fire daughters living here on the sub-pages of Silkens Windhounds under Cessie and Lily and 'The Firegirls'

We started with the ownership of Borzoi back in 1978, buying two male pups from the Colhugh Kennel. From one of these males we bred our own litter to our Yadasar bitch, but sadly never bred from the offspring of this litter. I guess the time wasn't right as we had our own litter - twins boys!

During these early years we also purchased a male Colhugh Calatka from the very well known litter which included C.Camiknickers. 'Latka' gave us a great deal of pleasure and encouragement with the breed. He was quite simply an extrovert, with a real zest for life, although never to finnish the title of UK champion, he was awarded 1CC, 2 RCC one of these from Crufts and a green star from Ireland. Later came Ch. Vronsky White Hunter JW, another extrovert, who was adored by many, not only for his good looks but his charm. He produced for the Fernheath Kennel a small litter from which we had his son 'Thor'. This pictorial story of our Borzoi can be found at  memory lane.

The sudden loss of White Hunter in 2001, was a bolt from the blue, and hit me hard. But a little later that year, accompanying a friend, I had the fortune to visit the Manitias kennels. We were introduced to M. Kilimanjaro, and, as in the words of a song "I just can't get you out of my head" I knew that fate had led me there, that special day, and the rest as they say;- is history.

In November 2004 and later to become a UK Champion, Starborough Solar Eclipse over Endevor joined the fold, she has a vivacious nature and adores all her companions large and small, old and young, her best friend is Fira our first Silken, they have an understanding that 'runs' through the very core. To see them running together is awesome, if not a little heart stopping at times. Fira produced the first UK bred litter of Silkens Windhounds, we retained two of her beautiful daughters from it; -The Fire Litter. the other two females went to Starborough as they were co-owners of Fira up until that time, when Sole-ownership changed to Endevor.


Our three breeds lived happily together for many years, as long as everybody agreed that the Dachshunds ruled! 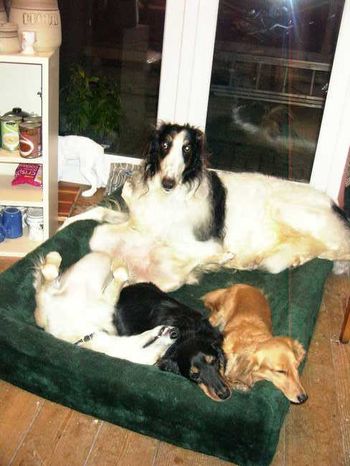 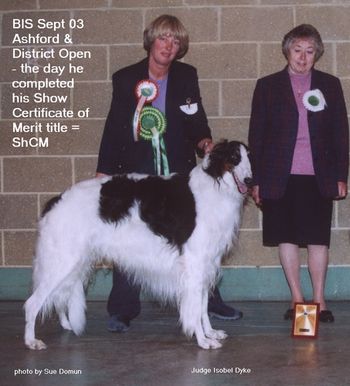 We know your place!! 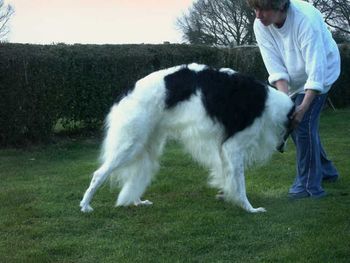 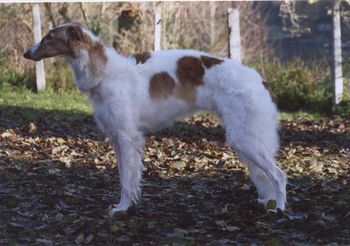 Is this my best side? 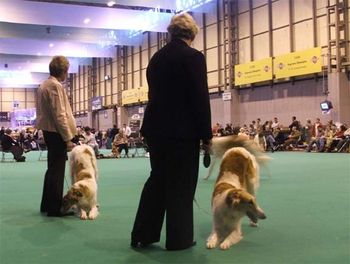 And that's what we both thought of that!